Your breaker box is an important part of your home. When it is working great, you can enjoy electricity in your home. But when something goes wrong with the breaker box, then everyone in the home will notice. This is why many people are wary about putting magnets on their breaker boxes and wonder whether this is a good idea or not.

For the most part, magnets are just fine on your breaker box. As long as you use them on the outside of the breaker box and keep them away from wires, and you do not place really heavy magnets on the box, nothing will get ruined and you will not be shocked. Let’s take a look at how magnets can work on a breaker box.

Related: The 5 Best Breaker Boxes for Your House

Can I Place My Magnets on the Breaker Box?

You need to make sure that the magnets are placed on the outside of the box. You should not put them on the inside of the breaker box. For the most part this can be fine, but if you put them in the wrong place and you put the magnets on exposed wires, it is possible that you will get shocked if your finger touches the metal magnet that is on the wire.

However, placing the magnets right onto the outside of the breaker box will be just fine. These little fridge magnets are not strong enough to cause any issue. They are not able to pull any charge out of the breaker box or shock you when you touch them.

Will I Get Shocked By the Magnets?

There are some rumors that putting a magnet onto the breaker box can be dangerous and will even ruin the breaker box or shock you. This is just not true. The breaker box has a little magnetism inside the lid and adding some smaller magnets to it will not cause any harm. The breaker box will be fine if you use this and you will not get shocked if you take the magnets on and off the outside of your breaker box.

Be careful when putting magnets on the inside of the box though. While you should be relatively safe when doing this, it is possible that a magnet could slightly touch one of the electrical wires that are inside. When you do touch the magnet, if it has been in contact with a wire, you may experience a slight shock. However, as long as the breaker box is set up well, it is unlikely the magnet will touch a wire so you will not get shocked.

Will a Magnet Ruin My breaker Box?

While breakers do have some magnetic components in place that help to trip the mechanism and can make the electricity turn off and on, the small magnet that you may use on it will not be strong enough to do this. If you are using a simple refrigerator magnet, it does not have enough power to cause any issues in the breaker box.

There are some magnets that are powerful enough to cause some issues though. They may not necessarily damage the breaker box, but they could cause the breaker to trip more often than it has in the past. If you are using a heavier magnet it could mess around with the magnetism in your breaker box. You should avoid using these on your breaker box.

A good way to tell whether the magnet is too big for your breaker box or not is to leave one on there for a few days. If you notice that the breakers are tripping and they never did this in the past, then it is most likely from the magnet. If you have a few big magnets in place, then it is time to remove all or most of them and consider painting the breaker lid to make it look nicer. If you just use the box to put up a few pieces of artwork from your kids, then you should be just fine.

Whether you are using magnets to help keep something in place around the breaker box or your goal is to design the box as an additional place to store notes and artwork, you may wonder whether magnets are a good thing to add to the breaker box. For most of the magnets you will want to leave on the box, there should be no problem and they are perfectly safe to use. 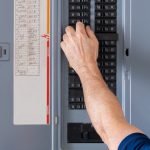 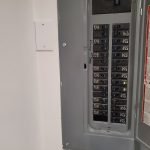