There’s no denying the special unique smell that comes with the opening of a new bag of mulch.  Not only does that rich smell indicate that someone’s getting ready for some serious yard work, it also tells you that spring is here.

But why mulch? There’s lots of reasons to spread mulch around your property, from boosting curb appeal to retaining moisture and preventing weeds from growing. But regardless the reason, there’s usually one problem.  How much mulch do you need?

Should you buy individual bags of mulch? Or should you order the mulch in bulk?  And how much does a single bag of mulch cover, anyway?

If you’ve been asking some of those same questions, keep reading.

By the end of this article, you’ll know exactly how much mulch to get for your project and know how much a single bag of mulch covers.

How Much Mulch Do You Need?

The problem is, most of us aren’t professional landscapers or master gardeners.  On the contrary.  Most of us might spread a bag or two of mulch once or twice a year.

That means the majority of us are unable to just look at a job and know exactly how many bags of mulch to buy.  As a matter of fact, if you’re anything like me, you try your best to estimate how much mulch to buy, and it always either too much, or not enough.  Meaning another trip to the store.

Not only that, a single bag of mulch with 2 cubic feet can weigh up to 50 pounds each! So we want to take our time to figure out exactly how many bags we’re going to need before we start lugging around such heavy bags of mulch.

To help you determine how much mulch you to buy,  you need to decide what type of mulch to buy.  Each type of mulch will not only weigh significantly different that the others, but each type also covers a different amount of area.

Other things that will determine the amount of mulch to get besides type, are:

Related: What Type of Mulch Last the Longest and Doesn’t Fade Fast?

Since wood mulch, or bark dust, is the most common type of mulch, that’s what we’ll talk about the most in this article.

With that in mind, the average standard coverage rates for mulch can be seen below.  So how much does a single bag of mulch cover?(http://www.buckeyeresources.com/coverage.htm)

The Different Types Of Mulch

For the purpose of this post, we’ll be talking specifically about shredded wood type of mulch, or bark dust.  Also, please note that the coverage rates for compost type mulches are very similar to wood mulch.

The organic types of mulches that are listed here usually don’t cost as much as the inorganic mulches.  Typically, a single bag of organic mulch covers a much larger area than say, and inorganic stone mulch would.

The downside to using organic mulch over inorganic though, is that you’ll need to replace organic mulch much more frequently, as it tends to break down over time.

There are many different kinds of wood mulches, such as red cedar and other hardwood varieties, shredded eucalyptus and large bark chips.

Wood mulch, or bark dust as it’s also called, all cover about the same amount of area. Of course the depth at which you cover will change the amount of mulch you need.

Like I mentioned earlier, organic mulch such as wood mulch products, weigh significantly less than inorganic mulch, like stone.

How Much Does A 2 Cubic Foot Bag Of Wood Mulch Weigh?

The weight of a single bag of mulch largely depends on if the mulch is wet or dry. A bag of dry wood mulch weighs on average about 20 pounds. While the same bag of wet wood mulch can weigh as much as 40 pounds.

How Much Does A Single Bag of Wood Mulch Cover?

When not purchased in bulk, wood mulches mostly commonly come in 2 cubic foot bags. For the mulch to work correctly in preventing weed growth and moisture retention, it’s recommended to install at a thickness of 2 to 4 inches.

How Much Does Mulch Cost?

According to Angies List, “Hardwood and dyed mulches typically cost $30 to $36 per yard, or $3 to $6 per bag. To give your landscaping an extra pop of color, consider buying black, red or gold mulch.

Premium mulches, such as those made from cedar or cypress trees, can cost $40 to $47 per yard, or $4 to $7 per bag. These mulches tend to last longer and are less likely to blow away in high winds.”

One of the best ways to determine how much mulch you need, or how many single bags of mulch you need is to use an online mulch calculator.

This online mulch calculator from Lowes.com will tell you exactly how much mulch you need.

The reason I like this online mulch calculator is because it allows you to figure out how much mulch you need in 3 very simple steps:

Where Can I Buy Mulch By The Truckload?

In my case, because of the mass quantity of mulch I need to buy every year, I have to buy mulch by the truckload, or in bulk.  I’m fortunate enough that I have a guy who lives 3 miles down from me and delivers bark mulch in bulk right to my driveway.  As a matter of fact, a magnet with his phone number hangs on my refrigerator all year…just waiting for that one phone call.

But if you don’t happen to have a neighbor that delivers mulch, and you’re wondering where you can buy mulch by the truckload, then there are definitely several places you can check.

So remember, when deciding how much mulch you’ll need, first decide what kind of mulch you want and how thick you want it.  Next, measure the area you’ll be covering.  Finally, hop onto the online mulch calculator and input this information.

If you’re still having trouble knowing how much mulch to get, or even deciding what kind of mulch to get, then I highly recommend contacting your local home improvement store or enlisting the help of a professional. 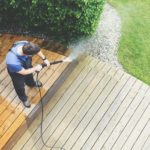 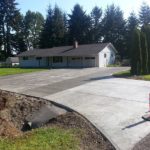