Is Raw Sewage Under The House Dangerous?

Sometimes, living in modern society, it can be easy to forget just how important certain things like indoor plumbing and sewer lines are. Particularly with how busy our daily lives can be, you often take things like that for granted. Every day, you use your sink, toilet, bath, or shower, and all of that wastewater has to go somewhere. That somewhere is your home’s drain, then the drain and sewer system leading out of your home.

But when there is an issue with those lines or the drains in or around homes, it can cause a sewage backup. There is also the possibility of a backup during heavy rains or disaster events like hurricanes, where storm drains or municipal facilities cannot keep wastewater contained.

When this happens it can cause raw sewage to back up into the streets, your yard, under your house, into your basement, or crawl space, or even the interior of your home. While this may not sound like something that you would worry about, since inside you can simply mop up and bleach the floor, and outside the rain and drains will eventually just rinse all that toxic muck away, right? Wrong.

The contamination present in raw sewage can stick around for longer than you want to know, and it can not only result in a persistent sewage smell coming from your crawl space, but it can actually play host to a disturbing number of pathogens and infectious agents.

These lingering biological agents can present a constant danger of not only sickness, but lifelong infection, and even death. Aside from those, there are even dangers that are completely inanimate that can present an immediate or prolonged danger during cleanup and remediation efforts. Let’s take a look at 7 things that could present a danger to you or your family.

7 Serious Dangers of Having Raw Sewage Under The House

Salmonellosis is an illness caused by the Salmonella bacteria. Salmonella is extremely hardy and is known to be able to survive outside a host for some time. This fact alone makes it one of the absolute most dangerous bacteria in raw sewage. Not only can it cause severe gastroenteritis, but it can also cause typhoid fever, and paratyphoid fever, all three of which can easily be deadly.

Salmonellosis is a symptomatic infection where the most common indications of infection will be fever, stomach cramps, diarrhea, nausea, and vomiting. The illness will often take between 12 and 36 hours to incubate and become symptomatic. More severe cases will cause extreme dehydration, and it can be confirmed with a stool or blood sample.

Since Salmonellosis can be contracted so easily through contact with infected feces from either animals or humans, it is an incredibly common illness to contract during contact with raw sewage. It can also be present in normal floodwaters since it can enter the water through storm runoff, agricultural runoff, or even malfunctioning home sewage handling lines. This means it might be a danger with only minimal flooding.

Cryptosporidiosis is caused by a parasite called Cryptosporidium. It affects both the lower intestines as well as the respiratory system. It can be quite severe for people with fully functioning immune systems as well as those who may be immunocompromised, and in the immunocompromised, it can produce such significant respiratory distress that it becomes fatal. Cryptosporidiosis is present in fecal matter and is spread primarily via fecal-oral transmission.

The most recognizable symptom is watery diarrhea, which may or may not be accompanied by an unexplained cough. It can occur as an asymptomatic infection, an acute infection, or as recurring acute infections. Periods of apparent recovery can last for up to a month before returning.

While it is often acquired through contaminated water supply ingestion, it is also incredibly easy to become infected during contact with raw sewage. Symptoms can take 5 to 10 days to surface after infection and can last for weeks in those with normal immune systems.

This is the condition caused by the Campylobacter jejuni bacteria. Campylobacter jejuni is a bacterium most often found in the feces of animals and in sewage. It is one of the most common agents responsible for food poisoning incidents, and it can cause gastroenteritis to such a severe degree that it can be fatal. Since the most common infection is caused by coming into contact with a food preparer that practices poor food hygiene, the levels involved with sewage contact could be potentially deadly.

The symptoms of campylobacteriosis can include fever, myalgia, and headache, all of which can be very severe. They will generally fade after 24 hours, at which point the more serious symptoms begin. These often include watery, bloody, diarrhea, cramps, abdominal pain, and fever that can spike to 104F. In most cases, the illness lasts no longer than 10 days.

Campylobacteriosis antibiotic treatment only has a minimal effect on how long the symptoms last, and in most cases, it cannot be used unless in high-risk patients. While the antibiotic eliminates the bacteria from the stool samples, it does not reduce the duration of infection and can be rendered largely ineffective by the patient’s history and biology.

One of the most dangerous infections that can be acquired during contact with raw sewage is the Hepatitis A virus. In a large number of cases, particularly with infections in the young, there are few or no symptoms. In the case of infection where symptoms become present, it can take 2 to 6 weeks from the time of infection before the symptoms even begin to present. The symptoms include nausea, fever, abdominal pain, diarrhea, vomiting, and jaundice, and have been known to last up to 2 months.

Hepatitis A is another illness that is present in the feces of infected individuals and is often spread by making oral contact with a sample of the virus. In the case of a raw sewage leak, there will be a large quantity of water that is heavily contaminated with fecal matter, so the presence of Hepatovirus A, the virus that causes Hepatitis A, is all but assured. There is no known specific treatment for hepatitis A, and a full recovery from the symptoms can take weeks to months.

Listeriosis is caused by bacteria commonly found in nature, Listeria. Listeriosis can be potentially deadly to anyone infected with it. While most infections in healthy people result in only relatively mild symptoms, those with weaker immune systems such as the elderly, or immunocompromised individuals such as those with HIV/AIDS or cancer, may contract an eventually fatal infection.

The immunocompromised and the elderly are susceptible to several potentially deadly complications from Listeriosis, like septicemia and meningitis. If a pregnant mother contracts Listeriosis it can even result in an extremely deadly condition called meningoencephalitis, which is fatal approximately half of the time.

Adenovirus infections are extremely common following exposure to raw sewage. The group of viruses called Adenoviruses is very large and has many possible infectious results. It can cause serious infections of the eyes, airways, lungs, nervous system, urinary tract, and even intestines.

Children and the immunocompromised are the most likely to become infected by an Adenovirus. Commonly caused infections and symptoms of Adenovirus exposure include mild fevers, cough and sore throat, diarrhea, and the childhood staple pinkeye. Other manifestations of Adenovirus infection are croup, bronchitis, pneumonia, and even a potentially severe case of conjunctivitis.

While these infections are most often spread through coughing and sneezing droplets onto others, infection through exposure to raw sewage is also a large vector for infection.

While not something that can be contracted from encountering raw sewage, it is a serious risk nonetheless. Raw sewage creates a number of harmful and even explosive gasses, which are collectively known simply as “sewer gas”. Sewer gas contains a number of gasses and compounds that humans should not be breathing in any kind of quantity, as some can be fatal at even moderate concentrations.

Some of these gasses include methane, hydrogen sulfide, carbon monoxide, ammonia, sulfur dioxide, and nitrogen oxide. Many of these are dangerous, caustic, and even deadly if inhaled, which is a danger for anyone who either works near raw sewage or might be thinking about doing a raw sewage cleanup themselves.

This can represent a danger, even if the raw sewage did not come from your home, but floodwaters or any other source. In many cases, the organic materials and compounds that create these gasses will contaminate the very soil under your crawl space and will continue to create these fumes and gasses. In cases like this, these gases can seep through the floors and affect you and your family’s health.

If you are attempting your own remediation of raw sewage contaminated soil, then you should certainly be aware of these dangers, and be sure that you are using appropriate personal protective equipment. In cases like these, that equipment should include full body coverings as well as an OSHA-compliant full face mask respirator. 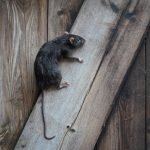 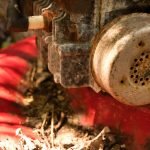